Make It Do - Shoe Rationing in World War II 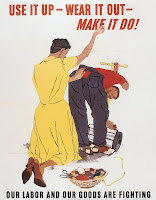 During World War II, many items were rationed in the United States, including shoes.

Why Shoes?
Due to the serious rubber shortage (see http://sarahsundin.blogspot.com/2011/01/make-it-do-tire-rationing-in-world-war.html), footwear made of rubber or with rubber soles was rationed or unavailable. Also, the military had a high need for leather, not just for shoes and combat boots but for those popular leather flight jackets. As a result, civilians made do with less.

Rationing of Rubber Footwear
Starting September 30, 1942, men’s rubber boots and rubber work shoes were placed under rationing. To obtain a new pair, a man had to apply to the local ration board, prove he needed the shoes for essential industry—not for sport—and turn in the old pair. Galoshes and overshoes were not rationed because they used less crude rubber, but sportsmen couldn’t get boots, and sneakers were no longer produced. 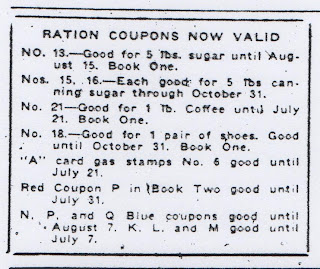 The strict rule that the ration stamp had to be torn from the book in the presence of the retailer was lifted for catalog purchases. If you wanted an extra pair of shoes, you had to fill out a long application at the ration board, listing every pair of footwear you owned, and explaining why another pair was essential for your occupation and why another pair was required to prevent serious hardship.

No exceptions were made for children and their rapidly growing feet. Families pooled their stamps, and adults made do with fewer shoes to provide for their children’s needs. However, pediatricians and podiatrists complained publicly that shoe rationing would produce a generation of “foot cripples.”

Making Do
To make do with less, people took care of the footwear they already owned, keeping rubber boots clean, dry, and away from excess heat or cold, and repairing shoes and boots whenever possible. Shoes made of fabric, such as espadrilles, were not rationed and became fashionable. Women also turned to fabric purses and belts.

Some people did not make do. Theft and black market profiteering were a continuing problem. For example, on May 3, 1944, a man was arrested in Pittsburg, California for stealing seven pairs of shoes from a shipment. The June 8, 1944 issue of the Antioch Ledger reported his sentence—six months or $500.

How would you do with only two or three new pairs of shoes a year? Try not to hyperventilate.